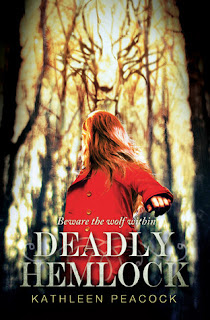 Out of all the paranormal creatures most popular books are about, werewolves are probably my absolute favourite. There's just something about turning into another species that really fascinates me.

And usually that's enough. If a book is about werewolves, isn't too same-y as other books and has a likable main character then I'm happy already. Deadly Hemlock is so much more than I ever expected, I was looking forward to this book but I got a whole lot more than an average shock-horror-there-is-a-whole-different-world-I-didn't-know-about paranormal romance.

Deadly Hemlock is a cross between angsty teenage drama, paranormal romance and a murder mystery whodunit... It's basically a mix of all the things I love about Young Adult books.

I really enjoyed the fact that this book is written in a way that the whole world knows about werewolves and 'Lupine Syndrome', it's a nice change to the protagonist finding about she or her loved ones are part of a super secret society of paranormal creatures. Peacock weaves in how the discovery of werewolves changed the way the world works and... it's realistic. That's just it, even though it sounds silly to even think that a book about werewolves could be described as realistic, it is. If we were to suddenly find out that humans coexisted with werewolves the world would probably handle the situation the way it is handled in the book, with governments setting up camps for the 'infected', people divided between hunting werewolves down and campaigning for their rights. For a werewolf book, Deadly Hemlock is strangely believable.

As for the murder mystery aspect of the book: epic, much?
I had no idea what to expect, who to expect, the deeper you got into the novel, the more questions you had about every single character and there were no answers! It was stressful reading this, so freaking stressful, I started doubting every friend, every ally, so I didn't judge Mac when she started to lose faith in most of the people around her.

Speaking of the people around her... Jason and Kyle. Daaamn. That is a whole load of drama right there, this book could have been just about Mac, Amy, Jason and Kyle and I would have happily of read it. There is a whole story line about unrequited love, love triangles, best friends, best friends' boyfriends and it's relatable and interesting. Ah! I am in love with the love story in this book.

I have to say, however, Kyle didn't appeal to me as much as Jason did. I think the most troubled, complicated characters with the dark past are the most interesting to read about so I naturally root for them when it comes to their relationships. (I was one of the strange ones who read Shatter Me by Tahereh Mafi and thought Warner (the psychotic villain!) was more interesting than Adam, so...) If we had been able to see more of Kyle and Mac's past, what made them click, I would have been more interested in the relationship but all their getting to know each other happened prior to the novel. I felt so detached from Kyle and Mac's relationship but Jason? Gosh, Jason is so layered as a character, there was so much we found out about him and his unique relationship with Mac as the book progressed. I want more!

Music choice: Deadly Hemlock ticks so many boxes and it really doesn't specifically focus on one genre or idea so picking a piece of music for this is especially tricky. Okay, the big thing that stuck out for me was the best friend dynamics throughout the book. Jason and Mac. Mac and Amy. Mac and Kyle. So... You're My Best Friend by Queen.

I selected this post to be featured on my blog’s page at Book Review Blogs.
Posted by Unknown at 22:29