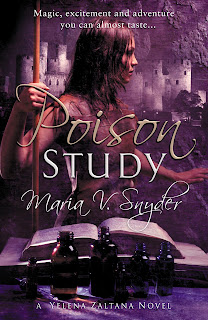 Second book by Snyder I have read. Still not the last.

There are probably only two things (that I can recall!) that were downsides to Poison Study. The first being the romance (again! Snyder, your romance never seems to fully appeal to me...) and the second, the anachronisms.

I think I'll talk about the 'things that don't belong' first. I don't understand how 'glue' and a couple of modern recipes could appear in a novel where the people wear capes and use candles. It just made me stop reading when things that didn't really fit appeared. I feel like I'm maybe picking on a very minute problem but even the smallest of things in a book can abruptly take you out of the amazing fantasy world and that can be a little irritating.

The only other thing in Poison Study that slightly irked me is the romance between Yelena and Valek. Why, Snyder? Why do I never seem fully satisfied with the romance in your novels? Is it me? Am I what's wrong? (Gosh, I feel like I'm breaking up with the author...)
*back on track* So, the romance. I just didn't like the fact that at first Valek thought of Yelena as expendable. Unlike in Touch of Power, the relationship doesn't do a sudden 180 from hate to love which is a plus. I'm happy that they ended up together, their relationship does progress in a realistic pace, evolving from respect to friendship to eventually, love. However, the realistic nature of their relationship doesn't fully make the relationship feel right to me, just because I assumed that Valek would be an enemy(ish) from the beginning.
I guess it could be me just annoyed that I didn't guess from the beginning who the love interest would be. Yeah. It could be that. :)

Overall, this book is... really good. I had an awesome time reading Poison Study. I loved the characters, especially Ari and Janco (<3) and the story line is very, very enthralling. I'm looking forward to reading the sequel but I'm a little scared because everybody I've talked to has said that the remaining books are disappointing. Should I be scared?

Music choice:  The one thing going around in my head... Toxic by Britney Spears. I'm sorry! It's just that it says poison somewhere in the lyrics and I said I'd say what song I thought about when reading a book even if it is ridiculous. So...