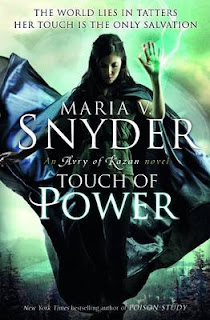 There's one thing I can say straight away about Snyder: she has the most amazing imagination. The world that this author creates, the fantasy land, it's... just wow.

This is the first book I have read by Snyder and although I had a couple of problems with Touch of Power, this will definitely will not be the last book.

I had this book on my bookshelf on my for a while and I had forgotten about it until I realised I only had a couple of days before it was due back at the library so... I re-read the blurb and started reading.

Let's just say it's not easy to stop reading a book that you're totally engrossed in.

The novel starts with Avry risking her life by healing an ill child. You see, before the plague devastated her world people like her, healers, were respected but after? After the plague, after healers were blamed for the disease, healers had to flee and hide because if ever caught, they would be executed. Avry heals the dying child but is then reported by the parents and sent to her execution. To her rescue comes a man and his band of outlaws, they want her to heal their prince before the Fifteen Realms are taken over by the corrupt King Tohan. The decision to heal the prince doesn't come easy for Avry, she doesn't think he's worth her life...

The whole book is about Avry travelling across the through the Fifteen Realms to the Nine Mountains with the people who saved/abducted her while the men try to convince her to heal the prince and... they run into a couple of evil people along the way. You know, to keep things more interesting.

It really is a very good book. (That's not very convincing, is it? Let me try again.)
Touch of Power is so different to anything I've ever read and I enjoyed it. (Better? xD )

However there were a few things that ticked me off. First, the romance. Now, there isn't any insta-love (thank you!) but at times I felt like I would have preferred the insta-love to what we actually got. *gasp* That bad? Yes, for me, that bad. Avry's love interest isn't obvious - at all - at the beginning of the novel, actually, at first, I suspected Belen to slowly develop feelings for Avry but no. Noooo. The love interest turns out to be the one person I thought Avry hated with all her being, the one person that I wanted to beat the shit out of. The person who HIT Avry, let her freeze, starved her and cuffed her to a tree multiple times. Even if this is a fantasy novel, even if women have different roles in this society, even if he - the love interest - improves a bit during the novel, it doesn't excuse the things he did so recently. I could have accepted the romance a bit more if the characters had actually mentioned and talked about what he did rather than him just mutter a vague apology half way through the novel. The romance in Touch of Power is truly infuriating.

The other thing that is really confusing is the pacing of the novel. One second it takes a chapter to record a day and then it takes a couple of pages to say that two weeks have passed. It isn't easy to keep up with how long has passed in the novel, the only way I could tell that a day had gone or a month had gone was when Avery or one of the other characters actually said that a certain amount of time had passed. I gave up on keeping up with the time a couple of chapters in - way too much effort.

It'd be a lie to say I completely loved this book from start to finish but... I didn't hate it, I actually really enjoyed it. Snyder knows how to weave together an interesting, surprising and original novel. I may or may not read the sequel to this book because of my earlier said problems and the rushed and slightly abrupt ending but I will definitely be reading another Snyder book. Poison Study, perhaps?

Music choice: One of the main things in this novel is the concept of death. There's a whole lot of dying in Touch of Power. Especially in the ending...
Death by White Lies