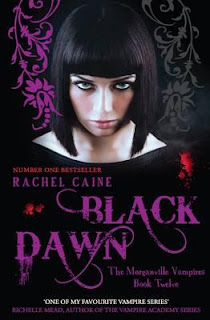 This series is my safety. I know that I'll have at least two enjoyable books a year. I look forward to reading the next installment and I'm always grateful that Caine doesn't spend two years working on a sequel. By the time I'm done with one book, the next title and synopsis is already out. Thank you Caine <3

Even though The Morganville Vampires are one of my favourite vampire series', I never usually remember what happened in the last book until I read the next one (that make sense?). There have been so many books that it's a little hard for my little ol' brain to remember every single plot. This is why it took me a chapter of rummaging through my head to finally remember the biting/vampire-and-human difficulties between Eve and Michael, the scary vamp enemy - THE DRAUG - taking over Morganville and the slowly dying Founder of Morganville, Amelie. Now, how did I forget all of that?

Once I caught up, Black Dawn was enjoyable. It's considerably darker, like Bite Club, than the first ten (that's a whole lot of books!) in the series... which I liked. While the plot got more serious, the feelings and relationships between the characters got deeper and more interesting to read.

The characters have changed and grown a lot since the beginning of Glass Houses. But: what I don't understand is how Claire can be such a smart girl (does it irritate you like it does me that we are reminded she is so clever every other page?) and still lack so much common sense. Claire, when a vampire is sick and can't tell between a human and a bag of blood, you don't walk in to the room unarmed when you were specifically told not to!

You could also start to believe the psychic girl  who tells you scary stuff that always seems to come true. That would help.

Other than my sudden realisation that Claire isn't as amazing as I remembered her to be, the other characters are okie dokes. Eve and Michael are sweet and I like how they work through their problems at a relatively realistic time, pretty gradually. As for Shane, I could not love him more, his little quips and remarks never fail to make me smile. For the last couple of books Shane went through so much emotional and physical trauma, it broke my heart when he had to go through so much more mental pain in Black Dawn.


If there were any speculations about Claire leaving Shane for Myrnin, I think they have disappeared. Even though Claire didn't really impress me in this book, ShaneandClaire are stronger than ever. xD

Overall, Black Dawn is hard to put down, the plot is original and the writing is hooking. I'm not the hugest fan of the alternating point of views, sometimes the thoughts just sound the same which breaks the illusion of the different characters actually being different but... I can deal. I'm looking forward to the next installment.

Music choice: Shane is amazing. He's probably one the one things that I love most about The Morganville Vampires so my music choice shows Shane's heartbreaking confusion about Claire after being attacked by the Draug. Illusion by Nathan Green :)