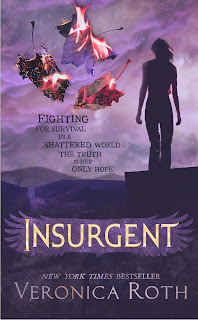 I want to start by saying that Divergent, the first book in this series, is one of my favourite books of 2011, out of the hundred or so books I read that year. Divergent, for me, was new, exciting and truly amazing. It was because of this that I expected even more from Insurgent... and that's a lot to expect, even from an author like Roth.

A large part of Insurgent's appeal is the surprising plot and unpredictable places Roth takes the reader so, I don't want to give away too much of the plot. If you haven't already read Insurgent yet, it would be best to go into it not knowing much, or better yet, not knowing anything about the story line of the novel.

Insurgent starts where it left off in Divergent, Tris (you know her), Four (I like the name Four better than Tobias, is that only me?), Caleb (Tris' brother and Erudite initiate), Peter (that Dauntless initiate dude in Divergent who stabbed a kid in the eye) and Marcus (Four's abusive  father and Abnegation leader) having just broken the simulation that was controlling the Dauntless soldiers, are travelling to Amity headquarters to get to safety and try to find out what Erudite are going to do next. While the story was fairly easy to follow because of the fact it started straight after Divergent finished, the various characters weren't so easy to follow. When I first started reading Insurgent I had forgotten who Caleb and Marcus were! Keeping up with the characters didn't become much easier as the novel progressed, more secondary and primary characters were introduced which only increased my confusion.

Losing track of the numerous people in Insurgent wasn't the only problem I had when reading this sequel, one of the first things I fell in love with about Divergent was Tris' fierce, brave characteristics that made her such an amazing heroine but in Insurgent, sometimes I felt like I was reading about a totally different person. A lot of Tris' internal narration is spent feeling sorry her self. At the beginning of Insurgent I understood why she did this, she had gone through a lot in Divergent however, no matter how much I tried to empathise with her, as I got deeper into the book, Tris' constant cries irritated me.

I sound like I didn't like this book, I did. Honest. Although I didn't love Tris' character, her changing relationships that she has with enemies, friends, brother, boyfriend and ex-friend-/-girlfriend-of-boy-she-killed were very interesting to read. The way that Roth is able to stay one step ahead of the reader isn't so bad either, I had no idea what was going to happen next, I was hooked.

Oh, a quick warning before I finish: the ending will kill you. There should be a precaution sticker on the front of the book. 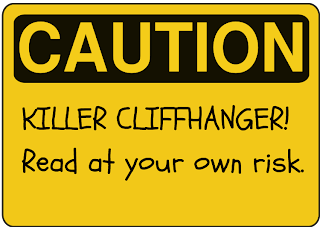 Other than a few minor problems (character glitches and you know, a death inducing ending) Insurgent is a great read and I cannot wait for the next book to be released and in my eager hands.

Music choice: Something about this book makes me think of an uprising or revolution so I thought about picking a song along those lines but I decided on something else. This song is about standing out and being strong. Also, the lyrics 'I'm sick of wondering Is it life or death?' perfectly shows Tris' frustrations about all the situations she finds her self in. I've picked One X by Three Days Grace.