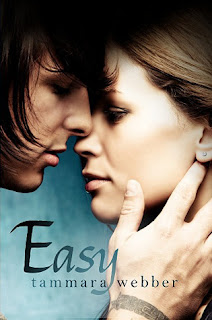 The thing about Easy is that as soon as I read the blurb for the book I was intrigued and after I read a couple of 5 and 4 star reviews, I was impressed. Without my consent, my expectations for this book had risen impossibly high. I really don't like it when I have high expectations... it only ever ends with me being disappointed.

Easy is a very good book; well written, emotional and original. The book starts dramatically (which ignited my interest), at a party where Jacqueline is in the car park, she is grabbed by a friend of a friend, Buck, and he attempts to rape her. Lucas, our love interest, comes to the rescue and quite simply, beats the shit out of Buck. And that's just the beginning of Easy! The book, for a contemporary read, is full of action and dramatic scenes.

At first I didn't really like the fact that the attempted rape wasn't immediately reported but I guess that's what this book is about; the gradual realisation that you can't keep something like assault hidden away and forgotten. As the book progressed and I found out how the assault was dealt with in the novel, I was satisfied. Webber realistically weaves together a novel with an initial problem and a slow, plausible solution. She doesn't make the problem go away suddenly, Webber realises the significance of attempted rape and outlines the various consequences and also clearly shows, how high the number of people who are affected by just one assault is.

I have mixed feelings for the characters in Easy. Most of the characters are top notch -  they are layered characters with more than solely one side to them which made them both interesting and believable to read about. If I had to pick, my favourite characters would have to be Lucas and it's pretty easy to explain why. Lucas is probably one of the best love interests and best male YA characters I have ever read. He may actually be the fantasy of all women and men (I am not limiting Lucas to just women) everywhere. Lucas is sensitive and caring, attentive and protective, sweet and loving. Lucas is smart and beautiful and... and... and he has a lip piercing! Ah! Lucas = perfect being.

While I love Lucas and many of the characters, for example, Erin, I didn't like Jacqueline as much as the others. If she had been a side character, a friend, I don't think I would have had a problem with Jacqueline but she isn't a side character, she's the protagonist. When I read a book, the protagonist or the main character has to be relatable so I feel more connected and sympathetic towards the characters thus, making the reading experience more emotional and memorable. Perhaps, it is the situation and what Jacqueline goes through that made me feel like I couldn't really relate or feel connected to Jacqueline. Whatever it is, although I didn't like Jacqueline as much as the other characters (it's all because the other characters rocked so much :) ), she is a good character. I like the fact that Jacqueline isn't a typical, virginal YA protagonist, it made the read more interesting.

The plot is a hooking one that played out well and although I found some parts a little predictable, it was an enjoyable story line to read. The pace of the novel is good until the very last part, I thought that the book ended a bit too fast after the final revelations.

Despite my little problem with Jacqueline, my annoyingly high expectations and the slight predictability of the plot, I thoroughly enjoyed reading Easy and I predict I will be reading more books by Webber.

Music choice: My music pick for Easy is Kiss Me by Ed Sheeran, I think that the lyrics and the softness of the song show exactly how Lucas is feeling when he's with Jacqueline. I especially like the lyrics 'Settle down with me And I'll be your safety' and 'I was made to keep your body warm But I'm cold and the wind blows So hold me in your arms'

Want to have a listen?