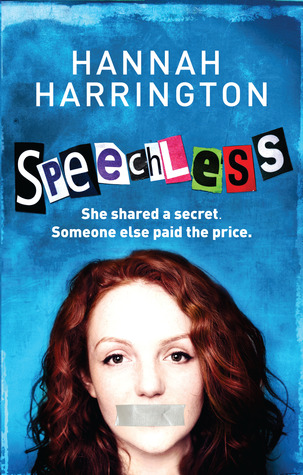 Everyone knows that Chelsea Knot can’t keep a secret

Until now. Because the last secret she shared turned her into a social outcast—and nearly got someone killed.

Now Chelsea has taken a vow of silence—to learn to keep her mouth shut, and to stop hurting anyone else. And if she thinks keeping secrets is hard, not speaking up when she’s ignored, ridiculed and even attacked is worse.

But there’s strength in silence, and in the new friends who are, shockingly, coming her way—people she never noticed before; a boy she might even fall for. If only her new friends can forgive what she’s done. If only she can forgive herself.

I'm pretty sure Harrington wants me track her down and give her a massive hug or like, homemade cookies or something. Do you think it would freak her out if I told her I loved her?

To put it very simply if awesome was a thing, it would be Speechless.

Despite the blurb the UK bright blue colourful cover fooled me into thinking that this novel would be a light hearted read but boy, was I wrong. The novel deals with a lot of real current issues in school including the brutalities of popularity hierarchies, bullying, prejudice and discrimination. It's scary how easily someone who was once feared can be outcasted and bullied so much by the people she used to call her friends and even scarier still, how some people can judge, verbally hurt and physically hurt others for something so small like race or sexuality.

"It seems so impossible that someone could look at them, see how plainly they care for each other, and find anything ugly or shameful or worthy of hatred in it, when all I see is something beautiful."
pg 256

Harrington clearly tells the reader through Speechless that words are powerful and that if you don't think or if you use your voice to cause pain then there will be consequences for you and for the people around you. There are a lot of lessons that can be learnt from Speechless which makes it so worthwhile to read.

The characters really make the book.. Harrington creates realistic characters that aren't all bad or all good. Even Kristen who is the epitome of evil at the beginning is shown to have a vulnerable, softer side by the end. I adored Chelsea who does sacrifice everything that is important to her in order to do the right thing and she gradually develops as a character growing more compassionate and empathetic as she adapts to being outcasted and as she gets closer to her new friends.

God, the love I have for Chelsea's new friends. Asha who is honest and kind and just everything I really want to be. Andy also, who may have understandably been a bit of a douche but Andy does forgive Chelsea and their friendship does become pretty adorable.

Speaking of new friends, there is one character I have deliberately not talked about until now and that is because he is on a whole new level for me. The amount of fangirling I did when Sam appeared and was said to be a skateboarder (I am honestly squealing right now) and right off the bat, Sam is just the nicest guy.

The way the relationship between Sam and Chelsea develops, even though she can't actually talk, is one of the cutest things I have ever read. Sam is forgiving and caring and gaaah, if fiction guys were real.

This book is everything you would want from a contemporary Young Adult book; realistic characters free from stereotypes, gradual character growth, a sweet romance, an interesting premise and lessons that you can actually apply to your own life. Although the cosy work place in a cafe is a little cliche (The Truth About Forever is the only one I can think of right now where the protagonist suddenly gets a job with an eccentric catering crew/diner/cafe and feels at home with this array of awesome workers but there have been more, I promise!) Harrington is officially one of my favourite authors and I can't wait to read more of her works. I recommend that you read both this gem and Saving June and I really hope that you enjoy them as much as I have. :)

Music choice: I guess this is a pretty obvious choice but when I was reading Speechless this was the first song that came to find. It summarises the messages in Speechless and the catchy but serious tune is what I think this book is; enjoyable but also deep and meaningful.