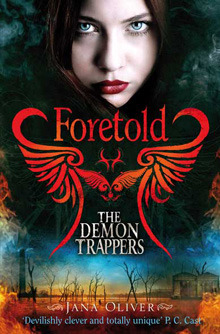 Summary (from Goodreads):
In the fourth Demon Trappers novel, Riley faces the final battle for humanity and Beck's heart—and Hell is the least of her problems
Now that Riley’s managed to (just barely) fend off Armageddon, everything’s changed. Well . . . most things. After their passionate kiss before the big battle in the cemetery, Beck is back to treating her like a little girl, as if nothing ever happened. While she’d love to just tell him off and move on, Riley vowed to take care of Beck the way he’s taken care of her since her father’s death—but she’s about to get a whole lot more than she bargained for. When she’s commissioned to go with Beck to his hometown and help him care for his dying mother, they stumble too close to a dark and murderous secret, one that Beck fears will drive Riley away from him forever. As chaos breaks loose, Riley may be Beck's only hope for redemption . . . and survival.

Meanwhile, up in Atlanta, it’s quickly becoming clear that Heaven may have won a battle, but the war is far from over. Riley and Beck face a stormy future, as Lucifer's ex-right-hand-man, Sartael, proves himself to be more resilient than anyone thought. He has Atlanta in his grip and is about to begin a brutal war with the prince of Hell. As the seconds tick down toward a final confrontation, it's up to Riley and the man she loves to finally defeat their old enemy, or lose everything they've fought for.

As I haven't reviewed the previous books in this series, I've decided that instead of simply reviewing Foretold alone, this will be an overall - and a little vague - review of the Demon Trappers series. Yaay!

From Forsaken to Foretold, the plot is consistently entertaining and the writing engaging. These books are fast paced and action filled, perfect for those who love paranormal fiction but want less predictable guy in the paranormal world falling for the human girl (and all the drama and pain their all consuming love brings the world) and more deathly battles, manipulative fallen angels and demons ranging from pesky little thieves to soul stealing seducers. Oliver creates an imaginative, unique and layered world that is easy and enjoyable for readers to get lost in.

The characters are all not obviously good or inherently evil. Riley and all the other characters introduced are perfectly flawed making for not only an entertaining read but one where you can also relate with the characters. While the characters' traits are realistic, some of their dialogue and gestures are quite ridiculous. I found myself raising my eyebrows at multiple thumbs up and when Riley was feeling super generous, both thumbs up. Wow. To me, it felt a little over the top and a bit like Oliver was trying really hard to get the essence of being a young and "hip" person and it just didn't pay off all the time.

Just like the characters, the romance throughout The Demon Trappers series has its positives and negatives. What I loved so very much about the romance in The Demon Trappers is that all Riley's relationships lead up to and build up to the eventual pairing in Foretold. The tiny hints starting in Forsaken suddenly make sense in Foretold and that is just so adorable. The only slight problem I had with the romance in Foretold is that because the relationship isn't explored in this way until this book, the relationship seemed to develop and get incredibly serious very quickly. Other than that, it is all very sweet and cute and awwhr-inducing. :)

Overall, The Demon Trappers has everything that a Young Adult Paranormal should have (ie. witches with ever changing chest tattoos and the Vatican making an appearance every now and then ;)) and I would definitely, definitely recommend it. Due to the intricate world of The Demon Trappers I truly believe that if Oliver wanted she could add more books to this series or even create a spin off series. All I can say is that if that ever happens, I'll be the first one to grab them off the shelves.