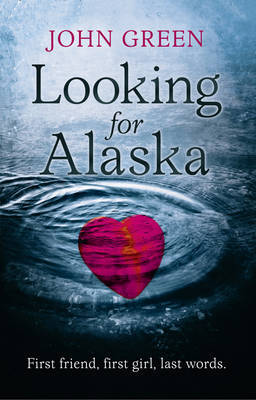 Before. Miles "Pudge" Halter's whole existence has been one big nonevent, and his obsession with famous last words has only made him crave the "Great Perhaps" (François Rabelais, poet) even more. Then he heads off to the sometimes crazy, possibly unstable, and anything-but-boring world of Culver Creek Boarding School, and his life becomes the opposite of safe. Because down the hall is Alaska Young. The gorgeous, clever, funny, sexy, self-destructive, screwed-up, and utterly fascinating Alaska Young, who is an event unto herself. She pulls Pudge into her world, launches him into the Great Perhaps, and steals his heart.

After. Nothing is ever the same.

Perhaps John Green just isn't for me. It's true that I've only two of his works but the two that I have read (The Fault in Our Stars and now, Looking for Alaska) are, I believe, his most highly regarded novels.

That's not to say that I didn't enjoy The Fault In Our Stars or Looking for Alaska, I did, it's just that I didn't feel as emotionally invested with the characters as most people and I wasn't too affected by the events that took place in the two novels.

Similar to most readers I didn't completely predict or expect what was going to take place in Looking for Alaska, I knew that something would happen due to the '*insert number here* Days Before' chapter headings leading up to the turning event but I didn't think it would be what it was. (I'm trying to make this review spoiler free but it's pretty hard and I'm not sure if that sentence made too much sense.) The use of the Before count down chapter headings is awesome, it builds up so much tension knowing that something is going to happen soon. The After headings, also, are very effective, the change from  Before to After just really shows the importance and effect of the event to everybody involved.

The characters were interesting to read about but I can't say I liked them very much which is probably why I wasn't very emotionally invested in them or what happens in their lives. I wasn't very keen on Miles' insta obsession with Alaska Young, to be fully honest, I didn't find Miles or any of his new friends to be likable either. While as a teenager, I can understand teenage angst, these characters seemed to drown in self pity and angst. They are judgmental and try to find any way to separate themselves from other people such as the 'Weekday Warriors vs. the poor' feud. There's something the Colonel, Miles' room mate and friend, says about a rival school about how the only thing he hates more than rich kids is rich and stupid kids which really irked me. Also, I found Alaska to be too unpredictable and too blunt to be very enthralling. However, on the up side, I found it compelling to read about Miles' change in the novel from lost and pretty much just existing and not really living to meeting his new friends and coming out of his shell to really appreciate life.

The lack of the characters doing stuff other than getting drunk and pulling pranks didn't bother me. I actually found the philosophical thinking and the characters trying to answer big questions one of the best parts of Looking for Alaska. The religion class which triggered a lot of this thinking added to the book a great deal and it really reminded me of my own philosophy classes at school which was pretty cool.

I feel like an uber bitch for not loving this (because have you seen John Green on Tumblr or Youtube.. he's such an awesome guy) and I do wish I liked it more but... alas, the characters really pulled this down for me. I recommend that if you haven't read Looking for Alaska or The Fault in Our Stars that you do because most people really do love them to bits and you'll probably love it too. I am an anomaly guys. I will probably read more John Green books because he is a great writer, I think it's just that I haven't found the book of his that... fits me yet. :)

Music choice: Miles finding a place where he belongs is one of my favourite things about Looking for Alaska so.. This Is Home by Switchfoot