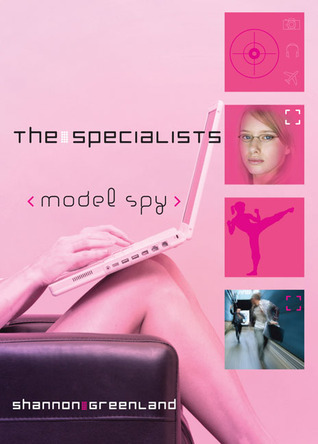 Teen genius Kelly James is in a lot of hot water. A whiz with computers, she agreed to help her college RA, David, uncover some top-secret information. After all, she doesn't have many friends and David has always been nice to her. It doesn't hurt that he's supercute and irresistible, too. All she has to do is hack into the government's main computer system. But a few hours later, her whole life changes. She is caught and taken in for questioning, only this isn't your run-of-the-mill arrest. Rather than serve a juvenile detention sentence, she accepts the option to change her name and enlist in a secret government spy agency that trains teen agents to go undercover. As if that wasn't overwhelming enough, she discovers that David works for this agency as well! And before she even begins to understand what is going on, she's sent on her first mission as an undercover model. And who better to partner with than David himself!

Model Spy is a very quick read that is, at times ridiculously unrealistic however, it's a book that will put a smile on the reader's face.. either because they're enjoying it or because they're laughing at it. I guess a smile is a smile and reading this little pink mushy fluff ball is guaranteed to leave you with a wide idiotic grin on your face. FACT.

For me, after finding out that Kelly, our protagonist, is a girl with an 190+ IQ who is able to hack into the governments computer system further than anybody else in history and who's only flaw is being clumsy I couldn't take Model Spy seriously. Oh, and did I mention that this girl also happens to look like a 'Victoria Secret model' too?.. Although Kelly is presented as practically perfect, she could be pretty stupid for an incredible smart person and her ability to judge people, promptly placing them into a  neat little labelled box became quite annoying.

Other than Kelly there are many secondary characters Greenland introduces into the novel who are only slightly memorable because of their fun nicknames. Putting nicknames aside all these characters are very one sided and lacking in depth. As this is only the first book in the series the lacking in layers in the very minor characters is forgivable however it would have been nicer to have delved a little deeper into the personalities of important characters, for example David.

Speaking of David, our love interest, the book ends pretty ambiguously, not telling the the readers straight up whether or not David and 'GiGi' (damn, I will never get used to that name.. doesn't it strike you as a tiny chiwawa name?! No? Maybe it's just me...) get together. And that's not such a big deal because if you're truly worried about the outcome of this pretty shallow relationship you'll read the next book in the series and you weren't really interested (*cough**cough* me *cough*) then it didn't really matter where the two went romantically.

What I can say about this book is pretty simple. This book is fun. Silly, entirely unrealistic but fun. And however much it kills me to say this, I actually enjoyed reading this fun, silly book about "spies". What can I say? I have a soft spot for fun and cute. Overall, this book isn't intellectually stimulating at all but it's not supposed to be. If you're looking for a fluffy book that has a cute little meaning about people being more than they often appear to be then Model Spy is actually pretty much perfect.

Thank you to Netgalley for providing me with an e-copy of this book in exchange for an honest review.

Music choice: Yes. This played on repeat in my head all throughout reading Model Spy. I'm sorry, okay? I don't know if I'm being sarcastic but here you go, the Mission Impossible theme song.