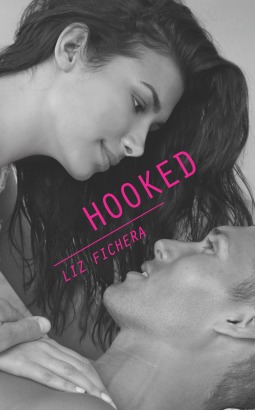 When Native American Fredricka ‘Fred’ Oday is invited to become the only girl on the school’s golf team, she can’t say no. This is an opportunity to shine, win a scholarship and go to university, something no one in her family has done.

But Fred’s presence on the team isn’t exactly welcome — especially not to rich golden boy Ryan Berenger, whose best friend was kicked off the team to make a spot for Fred.

GET HOOKED ON A GIRL NAMED FRED.

After reading a whole lot of mediocre books recently I really wanted a book that well.. hooked me and although at first I was just that, as the book progressed all the originality and intrigue that made me start to fall in love with Fichera's debut YA novel got thrown out of the window.

Fredricka or "Fred" being Native American is definitely a highlight of Hooked, there aren't many - definitely not enough - YA books where the protagonists have culturally diverse backgrounds. The parts about Fred's tribe and rituals are incredibly interesting to read however, while at first Fred's Native American background felt fresh, throughout most of the book I strongly felt like the only reason Fichera decided to make Fred Native American was to solely emphasise the difference between Fred and Ryan.

Fred as a protagonist is not bad but she isn't exactly the strongest of characters, letting people constantly talk about her and make fun of her because of her ethnicity and not doing a single thing to defend herself. This was fairly irritating but on a whole, Fred's passion for golf and love for her family could warm even the coldest of hearts. There's also something about Fred's relationship with her brother that is incredibly sweet and adorable to read about.

Ryan, on the other hand is unfortunately our love interest and is your stereotypical spoiled rich boy.. quite simply, he is a douche. This would have been fine, if Ryan was presented as a spoiled rich boy at the beginning of the novel who then slowly revealed more depth to his personality and was shown to improve in character. But Ryan doesn't really develop as a character, all that appears to happen is that he falls for a girl who everyone thinks is 'different' and so he does a couple of sweet things to make her like him. That is pretty basic protocol, right? When a person likes another person they do sweet things to "win" them over but that doesn't mean they've improved as a person and in this case, a character.

There's a part where Ryan says 'Who fences?' and I could help but laugh and think 'that's rich, do people play golf? Teenagers play golf? There are such things as schools with golf teams.. really?!'. I'm sure teenagers do play golf (evidently, as the book is about golf playing teenagers...) and I'm even more sure that many people play golf but once you dislike somebody it's hard not to find everything they say annoying.

Overall, fairly mixed feelings concerning Hooked, it's definitely not a book that I'd say you should stay clear of but similarly it's not a book that I would go out of my way to recommend. The premise of the book is different, I might say that the author is trying too hard to be different from popular YA fiction with the not-seen-before golf playing teenagers and Native American protagonist but even though there are different elements to the novel, when stripped back to bare bones, this book is your typical YA book with two completely different people falling in love despite the opposition they gain from friends, family and social expectations. Is that a good or bad thing?.. I guess you'll have to be the judge of that.

(WARNING: This is a pretty dramatic book.This is classed as Realistic Fiction and there are parts where it is pretty much bordering on unrealistic however.. I didn't have a problem with it.)

Thank you HarlequinTeen and Netgalley for providing me with a galley of this book in exchange for an honest review.

Music Choice: The one thing that truly surprised me - and irritated me - was the extremely large amount of prejudice against Fred's tribe and how much people looked down on Native Americans in not only the school but the whole town.. all I could think while reading was 'Where is the love?' so here you go, Where Is The Love by The Black Eyed Peas.