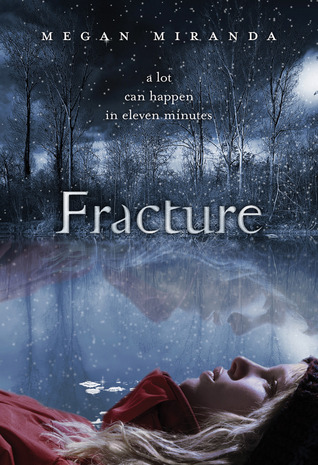 Eleven minutes passed before Delaney Maxwell was pulled from the icy waters of a Maine lake by her best friend Decker Phillips. By then her heart had stopped beating. Her brain had stopped working. She was dead. And yet she somehow defied medical precedent to come back seemingly fine. Everyone wants Delaney to be all right, but she knows she's far from normal. Pulled by strange sensations she can't control or explain, Delaney finds herself drawn to the dying. Is her altered brain now predicting death, or causing it?

Then Delaney meets Troy Varga, who recently emerged from a coma with similar abilities. At first she's reassured to find someone who understands the strangeness of her new existence, but Delaney soon discovers that Troy's motives aren't quite what she thought. Is their gift a miracle, a freak of nature-or something much more frightening?

After learning that Fracture was 'For fans of best-sellers like Before I Fall and If I Stay' I was practically going into cardiac arrest in the corner of the room at the idea of reading a book like If I Stay again. If I Stay is probably one of the most captivating and emotional YA books I have ever come across so this simple tag line and the very similar cover made me expect Fracture to be a carbon copy of my beloved If I Stay.

And funnily enough, that is not actually a bad thing. Other than the genre, the fact both novels have the main character in a coma for a while and that both deal with issues with death in one way or another, Fracture and If I Stay are quite different.

Speaking of death, the most memorable and intriguing parts of Fracture are the arguments brought up by Delaney and Troy nearing the end of the novel about euthanasia and unnecessary suffering.

"What are you doing to her?"
"I'm helping her. I'm easing her suffering."

For a book I judged, and probably many others, after the first couple of chapters to be superficial and teenage angst ridden, Fracture is surprisingly thought provoking and raises many questions about death that could lead to a lot of deep discussion on the matter.

While I scold myself for assuming the whole novel would be a fluffy mess of love triangles and typical teenage problems, I'm not surprised that I didn't expect much more than this after reading the first third/half of Fracture. From the very first page of the novel we are introduced to a character who is apparently the most perfect girl on earth with her intelligence (you are reminded of this of the charts intelligence regularly by the way), hate of popular people even though she hangs with the popular people (you know what I'm talking about) and picture perfect love interests. Yes, love interestS.. not one, not two but three amazingly hot (I am told by the description that that they are all very attractive...) guys who are shown very clearly to only be interested with our Delaney. I know. I rolled my eyes too.

Not only are the readers forced to listen to the tedious and constant internal dialogue of Delaney trying to work out why her best friend, Decker, is acting weirdly to her kissing another guy - spoiler.. actually it's not much of a spoiler, he loves her, we know it, he's known it for forever, everybody around them knows but Delaney... that's just great, another so called intelligent character who happens also to be unbelievably oblivious to everything around her - but there are also some random female characters thrown in to make Delaney look better. For example, we have this girl presented as a slut and inferior to Delaney simply because she likes Decker. Because that makes so much sense.

Saying all this, let's not forget that I did actually enjoy reading Fracture and it is a book that would appeal to those of you who like a splash of mystery in your YA fiction and just a bit of different. The second half of the novel is exciting and the way Miranda veers away from a predictable love triangle is amazing - I definitely didn't expect the way Delaney's love story played out! So, while usually I would say that life is too short to carry on reading a book that you aren't loving, for this little one I would say that it would be wise to stick it out until at least half way... for me, it was worth it.

Music choice: The very realistic dynamics Miranda creates between Delaney and her mother is actually one of my favourite parts of reading Fracture, not to mention the equally realistic snippets of information we receive about Delaney's mother's relationship with her parents. I love this song and it sums up all these parent-child relationships in Fracture... Numb by Linkin Park.

'I've become so numb, I can't feel you there
Become so tired, so much more aware
I'm becoming this, all I want to do
Is be more like me and be less like you'