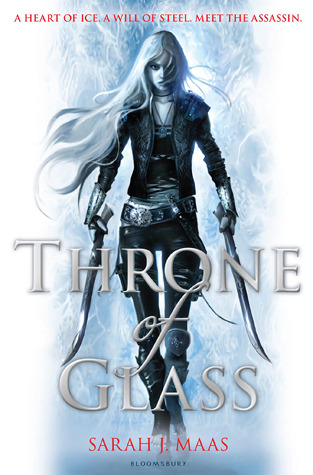 In the dark, filthy salt mines of Endovier, an eighteen-year-old girl is serving a life sentence. She is a trained assassin, the best of her kind, but she made a fatal mistake: she got caught.

Young Captain Westfall offers her a deal: her freedom in return for one huge sacrifice. Celaena must represent the prince in a to-the-death tournament—fighting the most gifted thieves and assassins in the land. Live or die, Celaena will be free. Win or lose, she is about to discover her true destiny. But will her assassin’s heart be melted?

I'm going to start by talking about the cover because really, how can you not? Ummm.. awesome much?! I would not like to meet this girl in a dark alley, especially if she has those killer swords with her. (I am rambling about the UK cover by the way..) The expression, the pose, the perfect shades of blue, the way she's not wearing a flouncy dress that takes up the whole cover, everything, it's just perfect. I am in love with a book cover. And I didn't think I could get any weirder.

After spending a couple of hours minutes salivating over the cover I actually opened up the book to read. You know when you have to force yourself to wake up in the morning and you just keep telling yourself that you're only going to stay in bed for another couple of minutes but after half an hour you're still there and you only wake up when you're already dreadfully late? Yup, well that's what it was like for me when I was reading Throne of Glass, at 1 o'clock in the morning I was still convincing myself that I'd go to sleep after a couple of pages (I didn't). This book as a reading experience was amazing, so very hooking and enthralling.

The main character, Celaena Sardothien, is a strange (nice strange) mix of terrifying killer and teenage girl. I don't think I've ever read a book where the female character was a strong one capable of taking somebody's life AND was easily pleased by a pretty dress. For some people this may be unrealistic, they may ask why an assassin could ever want to wear clothes limiting their ability to fight but honestly, the fact that Maas was able to break the trend of a female character having to be either/or is good enough for me.

As well as Celaena the two characters you most come across in Throne of Glass are Prince Dorian and the Captain of the Guard, Chaol Westfall. Both characters form close bonds with Celaena which I expect will then turn into a full blown love triangle in the next two books. There isn't too much of a love triangle in this book, although there is definitely a hint of one, and actually, there isn't too much focus on the romance at all. Dorian and Chaol are each, in my opinion, awesome in their own way. Chaol is loyal, fierce, serious and understanding while Dorian is snarky, irritating, caring and.. he reads. I am natuarally biased towards Dorian because he's a READER (with a library holding more than a million books *gulp*) while Chaol is a fighter but I guess we'll just have to see how these friendships/relationships evolve in the sequel.

Speaking of the sequel, I really hope there is more explanation of the history of magic and how the banishing of it came to be. I would've liked to have had more of the magic, religion, beliefs explained in Throne of Glass. Also, one of the few things I would've liked a little differently in Throne of Glass is the fight scenes.. I like it when the action is detailed and more frequent.

Overall, I thoroughly enjoyed Throne of Glass. I can't wait for the sequel mainly because I want more of Chaol, Dorian and Calaena but also for the beautiful writing and the fantasy world that I can't seem to get enough of.

One of my favourite bits from Throne of Glass: "Still, the image haunted his dreams throughout the night: a lovely girl gazing at the stars, and the stars who gazed back."

Music choice; My music choice, ladies and gents, is Easier To Run by Linkin Park. This song kind of shows the darkness that I would have expected Celaena to be like because of what she went through her whole life but also, I think it shows how much Celaena wants to forget about her past and change what she did to many people.