Review: The Catcher in the Rye by J.D. Salinger 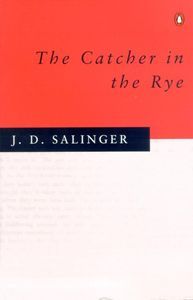 Summary (from Goodreads)
The Catcher in the Rye is the ultimate novel for disaffected youth, but it's relevant to all ages. The story is told by Holden Caulfield, a seventeen- year-old dropout who has just been kicked out of his fourth school. Throughout, Holden dissects the 'phony' aspects of society, and the 'phonies' themselves: the headmaster whose affability depends on the wealth of the parents, his roommate who scores with girls using sickly-sweet affection.

I was hesitant to read The Catcher in the Rye, simply because it is branded as a classic and I'm not known to pick them up. I don't why I don't tend to read classics voluntarily, I think it's because I don't like the fact that you're supposed to love them solely because of their classic status; the thing everybody assumes is genius because it has survived through time.

The Catcher in the Rye has no plot and the protagonist is really annoying and whiny and judgemental all the way through the novel.

I really liked this book though.

Although there really is no plot, it didn't matter. The book flows naturally, Salinger didn't try too hard to make this book interesting with an intricate story line, the thoughts and characters really speak for themselves. I think actually having a plot would have made been too much for this novel.

All The Catcher in the Rye is is a boy commenting on everything around him and about him over the period of a couple of days. And it is so, so interesting. I could not put this book down, it's addictive, thought provoking and actually, quite relatable. There were parts were I just thought 'YEAH, I KNOW WHAT YOU MEAN!' and 'THIS IS CRAZY, IT'S LIKE YOU'RE IN MY HEAD!'.
eg.
'You can't stop a teacher when they want to do something. They just do it'

'How do you know what you're going to do till you do it? The answer is, you don't.'

Salinger creates a voice that is so honest and it feels as if Holden Caulfield is speaking to you and only you, as if you have a personal bond with this boy. It is actually quite insane. Yes, there were a lot of times where I thought Holden was really judgemental, calling people 'phonies' for being human. I think, not everybody is perfect and always themselves but that's human nature and it did irritate me that Holden thought everybody inferior to him because they were 'phonies' but.. I guess that's what makes him such an interesting and honest protagonist.

Overall, The Catcher in the Rye is definitely a worthwhile read. I don't think it's the best book in the world and if you get bored easily this probably isn't the best choice for you. Usually this wouldn't be a read for me but I really did enjoy reading The Catcher in the Rye and there are ideas and thoughts in this novel that I can I see myself remembering for a long time.

Music choice: 'The future still looks good
And you've got time to rectify
All the things that you should

Do what you want to do
And go where you're going to
Think for yourself'
Half of these lyrics sound like they're what Holden would say and half of them are what people were telling him. This is Think For Yourself by The Beatles