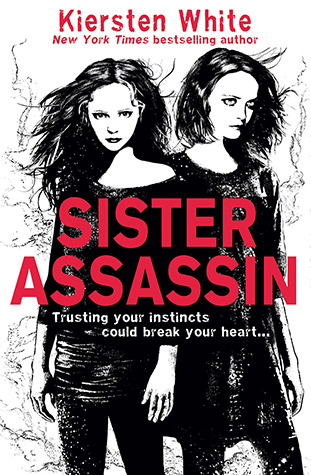 Summary (from Goodreads):
She never chose her deadly gift but now she’s forced to use it. How far would you go to protect the only family you have left?

Annie is beset by fleeting strange visions and a guilty conscience. Blind and orphaned, she struggles to care for her feisty younger sister Fia, but things look up when both sisters are offered a place at Kessler School for Exceptional Girls.

Born with flawless intuition, Fia immediately knows that something’s wrong, but bites her tongue… until it’s too late. For Fia is the perfect weapon to carry out criminal plans and there are those at Kessler who will do anything to ensure her co-operation.

With Annie trapped in Kessler’s sinister clutches, instincts keep Fia from killing an innocent guy and everything unravels. Is manipulative James the key to the sisters’ freedom or an even darker prison? And how can Fia atone for the blood on her hands?

For all of you not residing in the UK you will know Sister Assassin as Mind Games (you know the one, the book with the awesome cover with all the pretty colours and super intense eyes).

I thought I'd mention that these two books are one and the same because I can't be the only one who assumed that they had nothing to do with each other at first glance! If I am then I'm worried for my brain.

Moving on from my own stupidity (I also assumed the sisters were twins until Annie referred to Fia as her little sister), White is known for her originality. Paranormalcy, the first book I read by this author, definitely stands out against most YA books for its unique plot and characters, so although I'm not the biggest fan of the Paranormalcy series, I can still appreciate the authors imagination. The same can be said for Sister Assassin. The inspired plot is probably my favourite part of the book, I really like how White creates a plot that I haven't read before - yes, a higher power controlling a school of specially gifted teenagers has been done, but not in this particular way - which made me want to carry on reading despite not being completely invested in the characters.

As much as I liked the story line, the characters didn't quite hit the mark for me. It's true that they are incredibly unlike most characters in current day YA books (I LOVE that one of the protagonists, Annie, is blind.. it's a nice change to the completely perfect main characters that dominate popular fiction) but simply being different doesn't make for a successful character. To be honest, and a little blunt, I didn't like Fia. She's the younger of the two sisters with the "flawless instincts", I tried to understand her because of the many, horrific things that happen to her but I couldn't bring myself, unlike everybody else in the book, to blame her sickening thoughts and malicious actions on her experiences and "broken" mind. (Actually, I might have been able to accept this "broken" mind justification if Fia hadn't stopped herself from killing her mark because he saved a puppy and looked "too real to end".) Annie, in my opinion, is the better protagonist, she was easier to relate to, her joy at being able to "see" and her love for her sister is understandable but she wasn't as interesting to read about.

The main problem of Annie, Fia and also, the more minor characters was that they weren't developed enough. This could be because of the fairly short length of the novel or the fact that this is only the first book of the series but I would've liked to have seen more depth in the characters and more layers to their personalities. As well as depth, the characters also lacked growth, this is most probably because of the present day story line taking place over a couple of days maximum but seeing at least a little change in the mind set of Fia would have made my Sister Assassin reading experience a more fulfilling one.

A side note to the people who hate flashbacks, you may want to stay clear of this particular book as it's pretty jam packed with them. I actually really enjoyed the flashbacks (I don't usually!) because they made you understand the relationships and dynamics between many of the characters but... there are quite a few of them!

Overall, Sister Assassin/Mind Games (whatever you choose to call it) has the potential to grow into a great series but everything is a little under developed at the moment. There are hints as to what is to come - a very clear love triangle for one... eek - and I can see myself really enjoying the series if the sequel shows some real character growth (for most, if not all the characters!) and White continues to deliver a good story.

This book is expected to be published on the 19th February 2013. Thank you to HaperCollins for sending me this e-galley via Netgalley - love you!

Music choice: I think, for this one, I had to pick something intense, bordering on angry because of Fia. This song depicts the anger and also, the deep loyalty between Fia and Annie.
'All because of you,
I haven't slept in so long.
When I do I dream of drowning in the ocean,
Longing for the shore where I can lay my head down,
I'll follow your voice,
All you have to do is shout it out.'
This is The Good Left Undone by Rise Against..