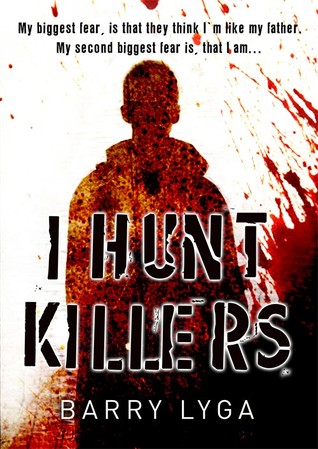 So it hit me that I should probably add a summary of the novel to my reviews so if you haven't actually read the book you know what I'm talking about. This is what most people think of before they start a reviewing blog but, hey! I'm getting there.. slowly.

Let's start this thing. First with a summary ;)

What if the world's worst serial killer...was your dad?

Jasper "Jazz" Dent is a likable teenager. A charmer, one might say.

But he's also the son of the world's most infamous serial killer, and for Dear Old Dad, Take Your Son to Work Day was year-round. Jazz has witnessed crime scenes the way cops wish they could—from the criminal's point of view.

And now bodies are piling up in Lobo's Nod.

In an effort to clear his name, Jazz joins the police in a hunt for a new serial killer. But Jazz has a secret—could he be more like his father than anyone knows?

This sounds pretty kick ass, right? After reading the synopsis of I Hunt Killers which told me I'd be reading a typical Nancy Drew whodunnit novel with the not so typical and awesome twist of having the usually wholesome teen be the offspring of a serial killer, I was excited, to say the least. You know what? I was insanely excited. So, I had high expectations as you can imagine.

I can't say those expectations were met.

I thought the book would be filled with angst, a lot of battling inner demons and trying to fight the darkness (that sounds cheesy but, yeah, darkness) that was threatening to take control of Jazz, the-son-of-the-serial-killer. In I Hunt Killers, there was angst, but not the kind of angst you'd expect. In reality there was a whole lot of annoying, teenage angst.. the type you'd expect from any typical teenage boy who's coping with school, nagging parents and hormones. As for battling inner demons? There was a bit of it, a couple of creepy nightmares and Billy's (The Dad.) voice in Jazz's head at sporadic intervals throughout the novel. The proper trying to suppress the evil, views and thoughts Jazz was supposed to have grown up with.. there wasn't much of that at all. In the novel Jazz is seventeen years old so it would have been only his dad and him for the first thirteen years of his life, that's a lot of indoctrination to get rid of in only four years.

Four years just isn't enough time to forget, for Jazz or the people around him. I was expecting Jazz to simply be The Son of the Serial Killer, I was expecting a lot of prejudice towards Jazz, people judging him and keeping their distance and everyone only really seeing his father, not Jazz himself, when they looked at him. Even though Jazz obviously wouldn't have been to blame, humans aren't exactly known to be rational when directing their anger. And their would have been A LOT of anger about a guy murdering in his 'triple digits'. Also, what I don't understand is why Jazz wasn't relocated, given a different name, a fresh start or at least moved to a different area.

The whole of this novel to put it bluntly, wasn't believable. Not only this but I can't say I liked Jazz or any of the other characters very much either. For a while, I was really enjoying the character of Jazz's girlfriend, Connie but then she went all crazy on me and decided to showcase her trust and love for Jazz while he was telling her he could easily KILL HER.

One of the biggest problems I had with I Hunt Killers was the way everything was quite predictable story line wise and it all kind of ended neatly with just enough loose ends to write a sequel. Speaking of the sequel, is there any need for it? I honestly think I Hunt Killers would have been fine as just a stand alone novel if the author hadn't added the pretty unnecessary part in the end which makes I Hunt Killers need a sequel.

I can't really see myself reading book number two although there were a parts of I Hunt Killers I really did enjoy reading like Howie (Jazz's best friend) and his relationship with Jazz and the dreams and flashbacks of Jazz's life with Billy but for the most part... I wasn't a fan of I Hunt Killers.

Music choice: I was expecting inner demons. Evil. Darkness. Everything Seven Devils by Florence + The Machine is.