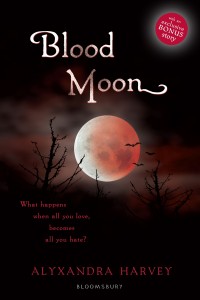 This Drake Chronicle has done a 180 from the last book. Goodbye to the cutesie, lighthearted fun of falling in love - super fast - with vampires and hello to a scary, creepy and surprisingly deep novel..

Although I really enjoyed the previous books with the all the Drakes and their love interests, I loved coming back to Lucy and Nicholas' points of views in Blood Moon - they're the ones I fell in love with! Especially as we, as the readers, don't have to see the repetitive nature of falling for a Drake vampire, the romance in this book is just building on what already existed which is a really nice change.

As I was saying before, Blood Moon = Scary. Creepy. There is a whole lot more viscous blood sucking to say the least.

I don't want to give too much away because if you've read the previous books and haven't read this yet then the feel of the book is actually a pleasant surprise. If you haven't read any of the Drake Chronicles then.. well, you probably shouldn't be reading this right now. (I'm sorry, I didn't mean to send you away! Come back five books later! :) )

So, the atmosphere is awesome. The plot was also awesome but only when I finally remembered what had happened in the last book, I was seriously lost in the beginning of Blood Moon but once I remembered - finally - and got into it... daaamn, I was hooked. The story line is so unpredictable and although it was a little weird jumping between the points of views of Nicholas, Lucy and Solange and my itty bitty brain couldn't handle the sort of jumps between sub plots at first, it was okay. I got it in the end. - Go me. -

I love Lucy. I haven't said that yet, have I? I do by the way, both of them, Lucy and Nicholas, they're my favourite characters in the whole series. Their cute little moments, their banter together with the insane loyalty and love between them makes this book incredibly easy to lose yourself in.

While I praise the characters of Lucy and Nicholas, and I thoroughly enjoyed reading about many of the other characters, Jenna, Hunter, Connor, Kieran... I can't say I liked Solange very much at all. I understand the way she acted and the things she did, she obviously goes through a hell of a lot in this book but I don't think I liked Solange very much in the first book either. I thought of her as immature and irritating as a character in the first book, My Love Lies Bleeding (or Hearts at Stake if you aren't British like-a me) and pretty much the same in Blood Moon. I found myself skim reading most of the chapters in Solange's point of view which wasn't the best idea as I just had to read those parts again to understand the story.

Overall, pretty mixed feelings about Blood Moon. On one hand, awesome plot and some amazing characters and on the other hand, not really liking one of the main characters. I am definitely going to be reading the next book though, especially as the misleading Lost Girls at the end made me think I still had a couple of pages left and I thought Harvey would explain what happened but no, she just decided to leave the book on an incredible cliffhanger. That.. that was mean, Harvey.

Music choice: A classic vamp song today. 'I pray everyday to be strong For I know what I do must be wrong' Although I'm not the biggest fan of Solange, I think those particular lyrics sum up her feelings perfectly. This is Moon Over Bourbon Street by Sting... it's pretty awesome. :)